Saturday, April 13, 2019
Change of seasons is one of those times when you get a crick in your neck trying to look back and ahead at the same time. Was it really three months ago we moved here and found ourselves shivering in the fenced-off area outside the residents' sauna, wrapped in our towels and looking up at the night sky lit in orange glow. Now it's daylight until 9pm and I've just bought two chairs for the balcony, and I even sat there this morning with a cup of coffee to keep me warm.

Compared with the suddenly vanishing snows and the green leaves that seem to appear overnight in eastern Finland, in England spring is a proper, long season. First I was really frustrated with it. There is no snow but nothing big seems to happen for ages, before the first crocuses come up. It took time to learn to enjoy the slow change, rather than the aggressive glare of spring sun reflecting off snow and the transformation that takes place in front of your eyes.

Now I'm finding spring is just as slow in the south of Finland. By the last week in March, snow was gone apart from a few patches melting in the shade and the frozen ridges snowploughs had left by the roadsides. Ice was not broken yet but there were snowdrops and the first green buds in hawthorns. When I walked to work on the last Friday in March, cafés were setting up their outdoor seating on the station square. By Monday, the terraces were filled with people in their winter hats and gloves and sunglasses. Suddenly it was after-ski Helsinki.

Early spring is brown. Grass has died and looks so far gone it'll never come back. Friends send photos from England and I keep looking at the grass in them, so alive and technicolour green.

A couple of weeks ago I suddenly had the whole afternoon for myself. I mean by myself, in the city centre. Friends and family were a big plus when we decided to come here for a year, and now I have workmates to socialise with, too. So it was odd being out alone and having a few hours with nowhere special to go to. Mind you, it's the best thing ever, and especially when you know there's a glass of wine with a friend waiting at the end of it!

So I set off and walked to the new Fazer café opposite Töölö Library. Now, the area where we live in Helsinki is definitely not a fashionable suburb. There are noisy, rough bars, take-away pizza, a family-owned Thai curry place and that's it. Now I found myself in an expensive snug coffee shop with a couple of senior gentlemen talking politics (Brexit was featuring heavily), a young woman with a laptop who looked like the kind of lifestyle blogger you read about, and tourists and locals with that air of urban chic. It reminded me that I'm really looking forward to some friends visiting soon and we're planning a walking tour of Kallio where I haven't been since it has moved up the gentrification scale. It's one of the joys of going away when you can lure people to come and see you!

I continued my people and nature watching tour across Sibeliuksenpuisto Park (tourists) to the shores of the bay (locals walking their dogs and jogging - or is it just called running now).

I saw a beautiful building and couldn't resist...

...stopping at Villa Angelica. I hadn't been to this part of town before so I didn't know about the atrocious reviews. It was a memorable experience but I didn't find it a nasty one like some visitors. It's expensive and the lady running it is a character.

When I walked in and asked for a glass of bubbly she said "You get two glasses out of this bottle. It's more expensive than the toilet offer." The toilet offer was taped to the entrance: "Using the toilet will cost you 7 euros but you get a free glass of bubbly with it." I said I'll take the small bottle. And she said "Oh, so you can afford it then." "Today" I said "I can afford it." She grinned. The cafe felt tatty but not any more than an English village tea shop, and I loved looking around downstairs. However, somehow I didn't feel like checking out the toilets.

Now I've got to go - it's weekend after all - but to finish there are a couple of pictures from Amox Rex and the Studio Drift exhibition:

And it's Ice Hockey Women's World Championship semifinals today at 4pm Finnish time, here in Helsinki! I don't follow sport but I hear they really are very good. A group from our daughter's school went to see one of the matches so I kinda feel more involved now.

Then Palm Sunday and Easter. Kids have virpominen tomorrow. It used to be a single willow branch we decorated at school and then had a few Kinder eggs on Easter day. Now... my sister said it's an industrial operation to get all of them virpomavitsa ready for Palm Sunday morning. 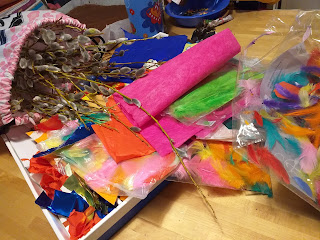 Popular posts from this blog

Notes from Finland - Height of summer

Friday, July 19, 2019
There went the April showers and darling buds of May. I can't get over the fact how similar the plant life, and the seasons, are in Helsinki and in Sheffield. It just shows how 'Finland' for me has meant ' North Karelia ' or possibly 'Lapland' at a stretch. I roll my eyes when immigrants and visitors make assumptions about Britain; how they take one area or group of people to represent such a diverse country. And now I find myself doing just that about the place where I was born. Ilosaarirock 2019 Saturday about 24,000 people. We're on the train, on our way to spend a weekend in mummola,  aka my parents. And I get to go to Ilosaarirock . I don't want to make jokes about early onset dementia but for the life of me I can't remember whether I've been before. Only recently I insisted that I'd seen ZZ Top in Puistoblues but when I checked the dates I realised there was no way I could have been there. At least I'll keep some memorie
Post a Comment
Read more

Sunday, June 07, 2020
28 May 2020 at 10.30pm I hadn't been out tonight so I decided to go for a quick ten minute walk in the evening sun. It's the lightest time of the year and after an overcast day we got a gorgeous, bright evening. The bird cherry is in bloom and I've just seen the first strawberry flowers in the woods, probably some garden escapees because they were too big for wild plants. Lily-of the-valley covers the forest floor, with the last of the wood anemones peaking through the leaves. Nearby woods on 27 May, favourite part of the day About life in Helsinki this spring I seriously thought about writing something that did not even mention, you know, the virus. But that would have been dishonest since it has affected our lives in so many ways. I've been getting this nagging feeling that I should be recording the current events but it's been alleviated a great deal since I realised that everybody is doing it. Photographers taking snapshots of daily life, a loc
Post a Comment
Read more

Päivi Creber
Hello! I'm a Finnish translator normally based in Sheffield, now in Helsinki. I'm using this space to share my random notes about living in Finland and the UK and working as a professional translator. Photo by Sami Jämsén, courtesy of Sanose.