Notes from Finland - Height of summer

Friday, July 19, 2019
There went the April showers and darling buds of May. I can't get over the fact how similar the plant life, and the seasons, are in Helsinki and in Sheffield. It just shows how 'Finland' for me has meant 'North Karelia' or possibly 'Lapland' at a stretch. I roll my eyes when immigrants and visitors make assumptions about Britain; how they take one area or group of people to represent such a diverse country. And now I find myself doing just that about the place where I was born.


We're on the train, on our way to spend a weekend in mummola, aka my parents. And I get to go to Ilosaarirock. I don't want to make jokes about early onset dementia but for the life of me I can't remember whether I've been before. Only recently I insisted that I'd seen ZZ Top in Puistoblues but when I checked the dates I realised there was no way I could have been there. At least I'll keep some memories of this year with this blog.

Right now we're crossing a narrow strip of land between the lakes near Simpele. It's still, and the water and the sky are almost the same colour, alternating between slate grey and a brighter blue. Sun is attempting to break through the clouds and even succeeding now and again. It's the lushest time of the year, and the woods create an impenetrable dark green wall next to the tracks.


At Kesälahti station we pass a long line of open carriages packed with narrow lengths of timber. Soon after there is a large clearing on the right, already dotted with the pink flower heads of fireweed, or willowherb. The way I was brought up, these signs of forestry and managed woodland are a sign of prosperity and an industry that feeds people whom I care about. And not just industry as in the pulp factories ('money smells,' they say around here) but industry meaning people who are ready to invest their money and have the energy and knowledge to manage stuff, whether factories, farms, woods or tourism. Because the closer you get to the eastern border in the Pielinen Karelia, the less certain it becomes that there will be enough people in the first place, let alone those who have the resolve to keep the economy going.

Sorry about this burst of glumness. I've read about two reports, one about the pulp factories being a silly way of using Finnish timber because much of the raw material is burned during the production process, cue carbon footprint - and we still cut down too many trees, and woods could be managed in a way that improves biodiversity. The other is Joseph Rowntree Foundation's report on the 'left-behind' areas in the UK which just happen to be our neighbouring communities. People there want things that should be simple, like jobs that are not zero-hour contracts or a bit of extra training, but no, can't do. In the sparsely populated areas in Finland, loss of industry has caused many people, like me, to move away and the population has aged, but I truly hope that there is enough will and determination not to let it get as bad as in some areas in the UK. And that the same will and determination will get things going in the North of England.


Anyway. It's July, and I have a week of holidays coming up and there is much to look forward to. The first summer months have passed in a flurry of action which explains the long break in blogging. Here are a few photos. I'll post more later, they are all downloading from the cloud. 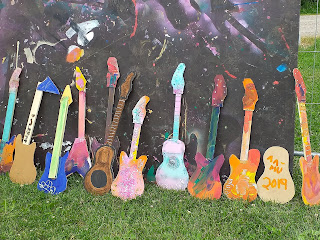 Kids made guitars at Puistoblues in June. 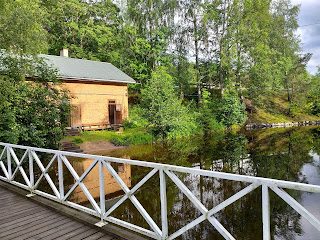 We hired a car and visited Western Uusimaa. Residents' sauna and the river for swimming in Ansku in early July. 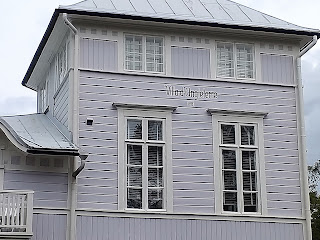 In Hanko, a historic spa and resort town on the south coast. Somebody called this the English Villa in French.
. 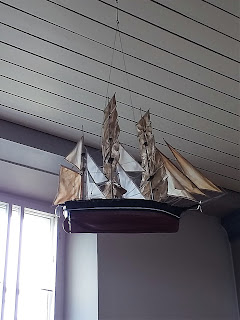 Ship in the church in Hanko. 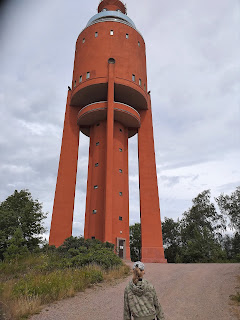 Popular posts from this blog

Sunday, June 07, 2020
28 May 2020 at 10.30pm I hadn't been out tonight so I decided to go for a quick ten minute walk in the evening sun. It's the lightest time of the year and after an overcast day we got a gorgeous, bright evening. The bird cherry is in bloom and I've just seen the first strawberry flowers in the woods, probably some garden escapees because they were too big for wild plants. Lily-of the-valley covers the forest floor, with the last of the wood anemones peaking through the leaves. Nearby woods on 27 May, favourite time of the day About life in Helsinki this spring I seriously thought about writing something that did not even mention, you know, the virus. But that would have been dishonest since it has affected our lives in so many ways. I'd been getting this nagging feeling that I should be recording the current events. That feeling's been alleviated a great deal since I realised everybody is doing it: photographers taking snapshots of daily life, a lo
Post a Comment
Read more

Saturday, April 13, 2019
Change of seasons is one of those times when you get a crick in your neck trying to look back and ahead at the same time. Was it really three months ago we moved here and found ourselves shivering in the fenced-off area outside the residents' sauna, wrapped in our towels and looking up at the night sky lit in orange glow. Now it's daylight until 9pm and I've just bought two chairs for the balcony, and I even sat there this morning with a cup of coffee to keep me warm. About spring Compared with the suddenly vanishing snows and the green leaves that seem to appear overnight in eastern Finland, in England spring is a proper, long season. First I was really frustrated with it. There is no snow but nothing big seems to happen for ages, before the first crocuses come up. It took time to learn to enjoy the slow change, rather than the aggressive glare of spring sun reflecting off snow and the transformation that takes place in front of your eyes. Now I'm finding spring
Post a Comment
Read more

Päivi Creber
United Kingdom
Hello! I'm a Finnish translator normally based in Sheffield. I'm using this space to share my random thoughts about living in the UK and sometimes in Finland, and working as a professional translator. Photo by Sami Jämsén, courtesy of Sanose.